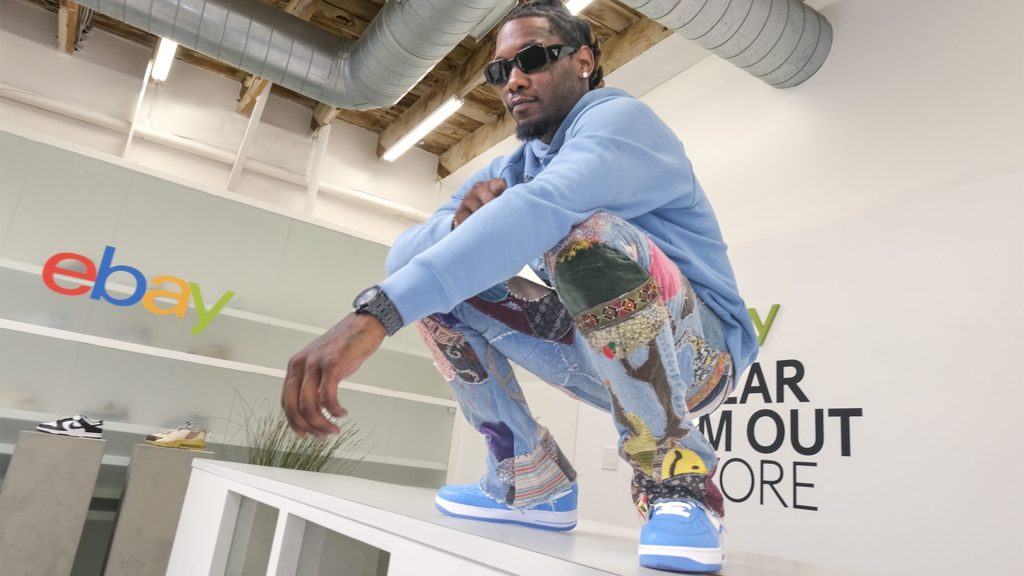 eBay tapped Offset, one of rap’s biggest sneakerheads.to curate a shoe collection for streetwear connoisseurs, but with a catch. The e-commerce company opened the Wear ‘Em Out Store, a pop-up shop in Los Angeles where the shoes were available at discounted prices of up to 70% if shoppers unboxed their shoes after purchase and walked out with their new gear. From Friday, May 27 through Sunday, May 29, the shopping experience featured 10 different selections each day.

According to a press release, 1,000 people were surveyed, with the majority of respondents revealing that they wear less than half of their shoe collections. The Wear them Out Store was designed to help sneakerheads live in the moment and encourage them to wear their purchases. In the store’s first hour of operation, dozens of sneakerheads opted in, donned their new purchases, and excitedly left the store.

“The Wear ‘Em Out store celebrates the love of sneakers while recognizing that sneakerheads often balance what they wear with what they keep in the box,” said Garry Thaniel, Managing Director of Sneakers at eBay. “eBay is the place to find all styles and prices, and now we’re offering an incentive to lace up summer’s most coveted sneakers.”

Hundreds of Offset fans and sneakerheads lined up for blocks outside the Los Angeles location. The first group in line shared with VIBE that they came the day before the grand opening around 8 p.m. to secure their seats. Shortly after arriving, other curious shoppers pulled out their own folding chairs around 10 p.m., 2 a.m., and 7 a.m. the next morning.

Offset decided to partner with eBay not only because the digital platform is his “go-to place” for finding shoes, but also because he considers himself a true sneakerhead and part of the sneaker community. .

“I know the community well. I know the shoe selling community and how many times before all these other platforms it was always eBay,” the “Ric Flair Drip” rapper shared with VIBE. “I was always looking for shoes on eBay when I couldn’t afford them when I was younger. And then even when I grew up and wanted to buy certain shoes, I got certain shoes like my PS5 FS1 from eBay, so I understand the community and I know what they’re doing is great, and it’s a real community, it’s a real thing.

VIBE caught up with Offset backstage and learned more about his personal style, favorite kicks and when fans can expect new music.

This interview has been edited for length and clarity.

VIBE: Do you consider yourself a “sneakerhead”?

Gap: I’m a sneakerhead for sure because I’ve been collecting shoes since I was in high school. When I couldn’t afford it, I used to trade my shoes for clothes and trade my clothes for shoes. And I always know the years of the shoes. I know the fabrics, the way it was done before now. I have so many old Jordans that I can barely wear because when I wear them they rip because they were made of foam back then. And I just have a lot of pairs of shoes. I have over 3,000 pairs of shoes.

I need to catch up (both laugh). What do you think separates someone who is, like you, a real sneakerhead from someone who simply buys shoes to resell them? Where do these lines get blurred for you?

They never get blurry because it’s two sides. I need both, actually. Personally, I think I’m a sneakerhead because I wear all my shoes. No matter how exclusive or crazy they are, I will always wear the shoe to take the shoe off. And stockists, I never put them to shame just because at this time of day things get bought up very, very quickly so it’s not that available and they make limited shelves of supplied shoes.

You need these dealers so you can sometimes grab the shoe. They’ll have them before the shoes come out, and then you’ll have an advantage because now you have bots and stuff, people are buying all the shoes from the bots before anyone else can touch them. I also understand that side. But at the same time, it’s the world of shoes. This is the world of sneakers. It has always been resold. It’s always been part of the game.

You’ve been collecting sneakers since you were in high school. What are some of your favorite sneakers?

Space Jams 11s, Carmine 6s, Raptor 7s, Jordan 15s. Where I’m from, north of Atlanta, Jordan 15s were crazy…Charles Barkley always had crazy Air Force 1s, and I don’t think everyone knows about them. 2006 shoes, Air Force 1. The way it was made, I feel like they got the wave.

Do you have all these shoes?

Yeah, I name every shoe I have. 1985Chicago [Jordan]1s. Oh, my Ginger 16s. I lost the sole three times. I bought five pairs. I don’t think they’ll be able to hold on. My Oregon 14. Shout out to my brother, [DJ] Khaled. We the best Jordans. I’m waiting for Khaled. When you hear that, I’m expecting my 5, bro. He just released a new color. I’m waiting for those.

Since I found myself maybe like in high school. When you find yourself – High school, college, well, really eighth grade. In eighth grade, school became all about freshness. For my school, you were popular if you were fresh. You didn’t have to play all the sports and do all the other things like most schools. You [were] Fresh off, you were popular. So always being fresh was my thing. I would go far with it. I had friends who went to different schools and I was in business. I would go to school the first month with my little sweeties, little twos, three couples. Then I’ll swap with one of my boys and then now I’m wearing his two, three pairs. So now I have six pairs. Do you know what I’m saying?

I have always taken care of my shoes. I had shoes from two years ago that could still be worn to school. My mom had three boys. I couldn’t always have 10 pairs of shoes. I would have two more from last year that were still tidy and nice and clean. I used to clean my shoes, no cap. I was going there too. Make sure my shoes are located because you don’t have many.

If someone asked, “How can I fly as fast as Offset?” What would you tell them?

I said to them, “How can you become as good as me? You can not. You can only fly yourself. It doesn’t matter what’s cool, it doesn’t matter what nobody thinks, honestly. Especially in this world now, man it’s an open world… it’s an open book. You can be yourself. Style, I feel like, comes from you as a person, and there are no specific standards to that, or that’s how it should be, especially in streetwear. That’s why I always stay close to streetwear because you’re always accepted. You have the world of skateboarders, you have the rappers, [and more] and everything collides into one thing. I’m wearing Kapital jeans from Japan. It’s just what looks good on you and feels good to you. Be comfortable with yourself and don’t try to follow people because someone else’s situation isn’t yours.

I know a lot of people who try to go for big brand things because they think the name is what gets them stolen. When you can nab the exact same fit of a hoodie at a thrift store, it looks even more flier than that, and piece it together with a couple [of] things. I could have a $5,000 crisis. I just saw someone outside with a Carhartt jacket that I know is probably $150. It’s vintage and it’s more flyer than anything new in stores, [or] in high fashion stores. So it doesn’t matter. Don’t get lost in that. Just follow your path and understand it.

What can fans of your music expect from you?

I’m coming in June! I warn you that I am releasing singles in June.