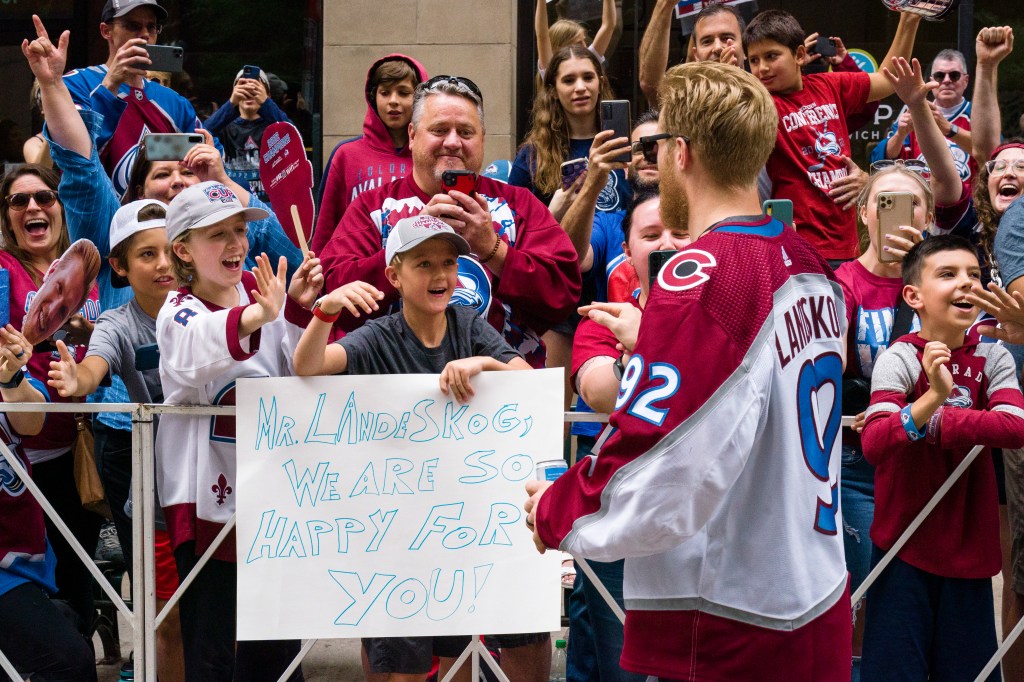 Avalanche defender Bo Byram was arrested by a cop. Mikko Rantanen drank from a shoe. The Stanley Cup victory parade brought out the best in Denver. “We literally got chills.”

Mikko Rantanen drunk in a shoe. Artturi Lehknonen too. At least they were finishing what they started.

But the MVPs of the Avalanche’s Stanley Cup Celebration Parade on Thursday were hands down the fans who kept defenseman Bo Byram out of the penalty box.

In a moment that went viral on social media Shortly after the streets cleared, Byram, the 21-year-old Avs defenseman, jumped out of his fire truck to greet people. He also happened to be rocking two cans of Coors Light for the trip.

Here’s the catch: When Byram tried to get back to his float, a law officer who was framing the bike parade route advised the baby-faced d-man to go back behind the gates. Said cop then gently pushed him towards the civilians he was supposed to have escaped from.

The only identifier Byram had on hand was the name on the back of the shirt, which he quickly handed to the officer in question.

“I play for the team,” Byram explained. (Because, you know, he does.)

“He’s a playerrrrrr!” shouted a fan.

“He’s a playerrrrrr!” shouted another.

At least we can laugh about it now. Right?

“It’s so good,” Highlands Ranch Avalanche fan Jared Buck said after the parade passed. “I mean, I never thought I would see the light of day. We are die-hard Rockies fans.

“Yeah exactly. It’s never going to happen (in western Newfoundland and Labrador). So to be in a championship? It’s just amazing.

Buck and his family came dressed for the occasion, complete with a life-size cardboard replica of Lord Stanley’s Cup, a labor of love for Jared and his two sons, Oliver and Thomas.

Dad had started right after the Avs swept Edmonton in the Western Conference Finals. He had a feeling. Based on the last six months, let alone the last six weeks, who wouldn’t?

“But they didn’t let me finish it,” he continued, “until the Cup was won.”

“The boys over there. The boys didn’t want to jinx it.

Five pieces of cardboard. A 19 ounce can of spray paint. A roll of duct tape. An old salad bowl. A lifetime of memories.

5 pieces of cardboard. A can of spray paint. A roll of duct tape. An old salad bowl. A lifetime of memories. #GoAvsGo #Find a way #Stanley Cup pic.twitter.com/lHE5ZZ22PE

Jared said he laid out the cardboard and stacked it like a birthday cake, just waiting for the “Go” sign.

First coat Monday. Second coat Wednesday for good measure. Also, because the tape holding the magic together was originally green.

A native of Denver, Buck was one of thousands at the first Avs’ Cup parade in 1996, along with his parents. In 2001 he was on a mission in South America during the second celebration. His mother sent him a videotape – ask your parents, your children – of the TV show to watch later on a South American VCR.

“It was legendary,” Buck said of partying like it was 1996, all those years back. “But I didn’t appreciate it at the time.”

This one? This one, emotionally, hit like Darren Helm. Straight into the boards.

“(The Avs) mainly have a young team. Most of them are under contract. The nucleus is young. I mean, yeah, we should have another one before too long.

Young Tony Capone was there too in 1996. He says his parents took him out of school to attend the first Avs victory parade in person. Of course, he was also 5 years old at the time. It has not been registered.

“I’m 31 now,” Capone said. “So this is the one, because I can really bond with players. I’ve been watching them for over 10 years. I have seen this team grow. And (Thursday) is like the best thing.

He’s had season tickets for the past four seasons, relishing every step of a franchise’s climb to the top, the drudgery to the top of the NHL mountain.

“No words to describe it,” Capone said as he watched the Cup Parade Day madness from the comfort of a sixth-floor balcony on West Colfax Avenue, a Lehkonen pass from Civic Center Park. “I mean, when we watched the Stanley Cup go by, we literally got chills.”

Capone had his, of course, just to be on the safe side. It was a homemade beauty, a beauty that from street level, looking up, seemed to sparkle against what was left of the midday sun.

Upon closer examination, the thing was a circular Frankenstein of Coors Light cans, duct tape, and hot glue. With a metal serving bowl – a wedding present for Tony and his wife, Brittany – attached to the top.

“During the playoffs, we only saved our beers from wins,” Tony explained proudly.

“Right before Game 1 of the Stanley Cup Finals, we built this…pretty sure it was hot glue on the beers.

“But we broke it (Thursday). We had to save it because we took the (expletive) out of it.

“We didn’t want to,” Capone replied. Then he smiles. “We were trying to drink it.”

Hey, better than a shoe.

Community profile: With the election over, Sunlight’s new mini-mayor is ready…

From boots to cleats: Schoonover’s long journey to WVU